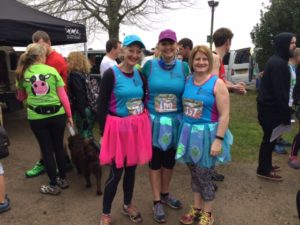 In a mad moment, I’d not just signed up for one 10 mile race but three in a month! Lytchett Manor Striders and Bournemouth Athletics Club had joined up with White Star Running to create an imperial series and what a series it was.  Two road races and one trail, with the added incentive of an imperial medal for completing all three. The races sold out in double quick time and even Dave the rhino secured a place!

First was hilly Lytchett on 12 Feb, then flat(ish) but mega windy Bournemouth 2 weeks later. Last was Larmer Tree on 11 March with mega hills, lots of mud, peacock fancy dress, a love station and very pretty bling. This was only ever going to be a race to have a good time at. 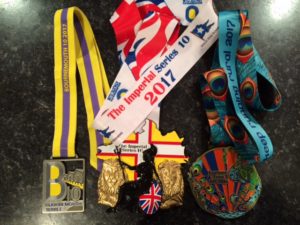 Three great races, with amazing marshals and signage. No medals at Lytchett but the others more than made up for that. Would I do it again? You bet, can’t wait for next year!!!

Many thanks to Beccy, Sharon V, Kelly, Sandy and Joy for keeping me company on various days and to Kerry for her company at each event.